Why? And how rubber mulch can answer this question!

It is a question that we should ask of ourselves more often. The word “why” should most often be followed with the phrase “am I doing this?” Is what I am doing making life easier? More complicated? Am I becoming a better person for doing this? Am I helping others, or supporting a cause as a result of my actions? I am no psychiatrist, but would venture to say that if we took a moment, just a brief one, and asked ourselves “why am I doing this?” we would not do many of the things we do.

Case in point. How many times have you done something only to respond, “I knew I shouldn’t have done

that”? Most often times this is said as a set of flashing red lights approaches your car from behind. So while I am on roll asking questions, but not providing many answers yet, I have one final one – “why do I do the same thing every year, twice a year, when I know there is a better option and an opportunity not to do it again for a very long time?” It’s a long question, but has a very short answer – mulch.

As we reach adulthood, I think the timing of when to mulch in spring, summer and fall has become part of our circadian rhythm. You didn’t plan to mulch, you just woke up and knew it was time to empty the trunk and start making trips to the local home improvement store, always trying to stack just one bag in or on your car to avoid a fourth or fifth trip, to buy that colored mulch that looks so good until in rains. You know its true – looks great when you put it down, but after the first rain the color just reverts back to its original shade of lackluster brown.

What if I told you that I had a shirt you could buy that would look as good as the day you bought it for years? You could wear it year-round, wash it as many times as you wanted to, never had to iron it, never have to dry clean it. You would probably think that is a pretty good shirt as over the long term you would save money because you wouldn’t have to buy as many shirts.

So using our shirt analogy, what if I said there was a mulch on the market that would save you time and money? Required very little annual maintenance. Looks as good as the day it was installed even after years of exposure to the elements. Won’t fade. Won’t rot. It helps the environment by giving discarded tires a second life. Did I mention that you could save thousands of dollars over the long term? 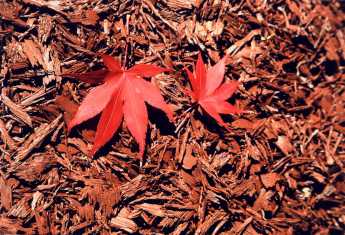